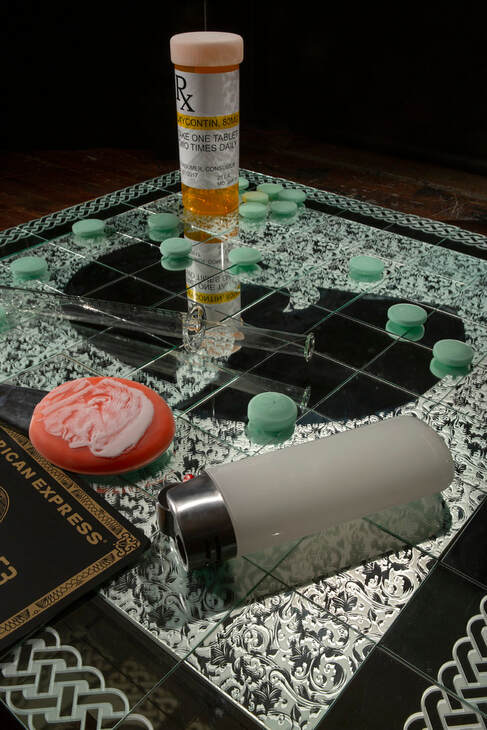 "Once Upon A Time, The American Epidemic" (detail) photo: Russell Johnson
Morgan Peterson

HOURS:
FRIDAY
Noon-4pm
BY APPOINTMENT ONLY
SCHEDULE YOUR FRIDAY VISIT

Born Of Our Culture/American Excess; Artist Morgan Peterson presents two distinct installations that are linked together through overlapping themes. She uses a unique system of metaphor and imagery based on themes of satire through pop culture and addiction, connecting the past with the present.

Born Of Our Culture is an immersive, visual experience inspired by true crime. Peterson has re-created scenes focusing on multiple tragic events that began in 1969. The specific events referenced are the brutal murders of Sharon Tate, Jay Sebring, Abigail Folger, Wojciech Frykowski, Steven Parent, Leno and Rosemary LaBianca as well as the assassinations of Fred Hampton (1969) and Huey P. Newton (1989). The Manson Family’s intent was to frame the Black Panthers for the murders they committed with the goal of inciting a race war. Influenced by Hollywood, pop culture and politics as her installation weaves a story as old as time.

“American culture is a regurgitation some of our highest exports-Hollywood and consumer wealth. My fascination with true crime began as a small child reading about the Tate/Labianca murders committed by the Manson Family Cult late in the evening on August 8,1969. This installation mirrors events that transpired that evening which captured the attention of the world as they unfolded while revealing the driving forces of racial discrimination and profiling that repeat throughout history.
These tragic moments in history leave the viewer with the feeling, “How could this happen?” or “This will never happen again,” when in fact the “story” is in a continuous loop. We are enraptured in a vast information overload that is our societal culture.
Our entertainment is entrenched with salacious information, power, corruption, true crime, drugs, sex, lies and videotape a smart phone. The real-life plot hasn’t changed we just happen to be holding the camera ourselves.
As a society we are consumed by the relentless pursuit of the trappings of power and wealth. American Excess is a current day reflection on excess, addiction, greed, and consumerism.
This set has furniture and decor from the 1960-1980’s sourced from around the country. It is staged to be reminiscent of Hollywood regency and mid-century modern aesthetic. The setting has references to the late Actress Sharon Tate’s living room, the film The Valley of The Dolls and the Iconic portrait of Huey P. Newton seated in a Peacock Chair. The sculptures within the scene are partially altered found objects as well as site specific custom pieces. The scene itself from afar appears to be serene living space, as you get closer, what you thought is not what it appears to be.”

Once Upon A Crime, The American Epidemic is made from blown and carved glass, steel, aluminum and wood. This installation is in reference to the sale of the Wu Tang Clan’s secret album, Once Upon A Time In Shaolin, to the infamous Martin Shkreli. Shkreli is most notably known as public enemy number one or Pharma bro. He gained notoriety by increasing the price of a lifesaving drug, Daraprim, overnight from $13.50/pill to $750.00/pill. Due to actions which led to defrauding investors, Shkreli was sentenced to 7 years in prison and had to forfeit 7.4 million dollars to the United States Government, which included the most expensive album ever sold, Once Upon A Time In Shaolin.
Most recently, the album has been sold by the United States Government to a private collector. This piece also speaks to the overreaching power in politics, being born with a silver spoon in your mouth, the opioid epidemic and all over corruption.

Born and raised in Boston, Massachusetts, Morgan Peterson is a graduate of Massachusetts College of Art and Design with a dual degree in Glass and Studio for Interrelated Media in 2006. Upon completion of her degrees, she relocated to Seattle, to pursue a career in the arts and to continue her education and advancement in the arts focusing on glass. Peterson has worked for many notable artists including Buster Simpson, Bruce Mau and is a full-time team member for Dale Chihuly. She is heavily involved with Pratt Fine Arts and Pilchuck Glass School not only as a member of the staff but also as in instructor. Her work was included in The Young Glass Exhibition, hosted by The Glasmuseet Ebeltoft, which is in international competition that only occurs once a decade. She has also participated in multiple group shows in 2019 including, Pittsburg Glass Center, The Habatat Invitational, CHROMA (Nashville, TN.), Traver Gallery (Seattle,WA), REFRACT (Seattle’s Glass Art Fair), and the Irish Glass Biennale (Dublin). In 2020 she exhibited a virtual solo show through Habatat in Royal Oaks, MI. 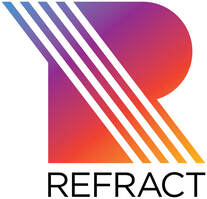 METHOD is excited to partner with REFRACT- The Seattle Glass Experience in the promotion of this exhibition.

REFRACT the Pacific Northwest's annual celebration of glass art, is making a triumphant return this fall! Join us Oct. 14-17 to celebrate the incredible artists and arts organizations who put our region on the map.
Visit refractseattle.org to learn more.